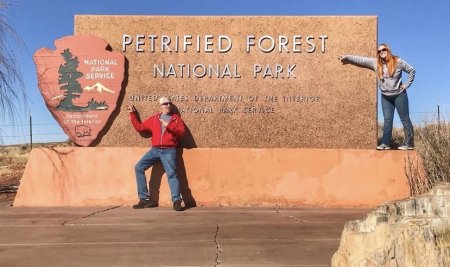 Ah… the Badlands of northern Arizona!

It’s truly difficult to describe the beauty of what you’ll find at the Petrified Forest National Park, but the best advice we have is make sure you take the scenic drive that goes from gate to gate; in our case, we entered the northern part of the park first, traveled through the Painted Desert, down through the colorful layers of rock in Blue Mesa, and ended in the southern portion of the park, which includes several areas of wonderful viewing of petrified trees from 225 million years ago. 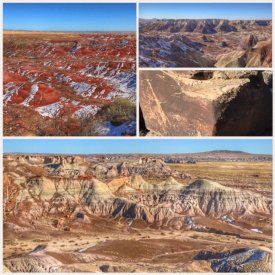 While we loved the crazy colors of the petrified logs, we were not expecting the beautiful colors of the Painted Desert, from lavender to grey, with patches of red, orange, and pink — all resulting from sand, silt, and gravel deposits from an ancient river millions of years ago, and now the exposed betonite and sandstone showcase layers of different colors.  Stretching from the Grand Canyon to the Petrified Forest in northern Arizona, the Painted Desert is a long expanse of badland hills and buttes that are breathtaking as well as stark.

Be sure to do the entire scenic drive through both the north and south sections of the park. Be sure to stop at the Painted Desert overlooks, Blue Mesa  (including the 1-mile loop trail), Jasper Forest, Newspaper Rock (for views of ancient petroglyphs), Crystal Forest (with our favorite hike, a .75-mile loop trail), and the Long Logs & Agate House (which includes 2.6-mile trail with lots of big petrified logs).

We traveled up to the Petrified National Forest from Scottsdale, driving on AZ-87 over a crazy geological formation called the Mogollon Rim, a 200-mile long, 1,000-foot cliff that has amazed travelers for thousands of years and which runs across central Arizona through three national forests (Coconino, Tonto, and Apache-Sitgreaves National Forest), forming the southern edge of the Colorado Plateau. The Rim serves as a boundary between two distinct worlds: the cool high country above it (which we experienced in Winslow with overnight temperatures in the 20s), and the burning deserts below it. The cliffs of the Rim are composed of limestone and sandstone. 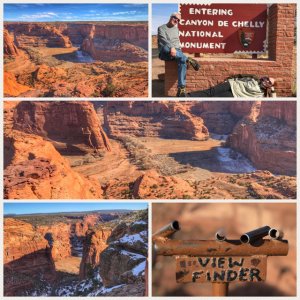 We concluded this leg of the journey with a stop at the must-see Canyon de Chelly National Monument, whose name is a Spanish corruption of tseyi, a Navajo word meaning “inside the rock”)… some call this park a little brother to the Grand Canyon (which we will see on our next stop). Canyon de Chelly is notable not only for the 1,000-deep canyons with sheer cliffs formed from uplifts and river flow, but because people have lived on this land for more than 5,000 years — longer than anywhere else on the Colorado Plateau. The park is located in Northern Arizona on Navajo land and is jointly managed by the National Park Service and the Navajo Nation. 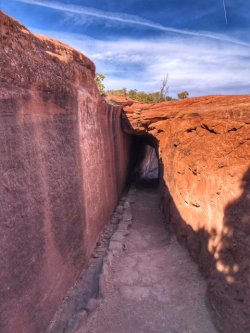 If you have the time, drive both the North and South Rim drives. We only had time for the South Rim, partly because we wanted to hike the White House Trail. The 2.5-mile (RT) trail is beautifully cut into the canyon walls and slowly meanders down to the canyon floor, offering inspiring and amazing vistas along the way, and begins at the White House Overlook. Here’s a photo of how the trail starts its way down into the canyon!

Of course, you also must go and see Spider Rock, which is an 800- foot sandstone spire rising out of the canyon floor. It’s named for Spider Woman, a key figure in Navajo tradition. Face Rock is also a great place. If you have more time and interest, you can also hire a Navajo tour operation to drive into and through the canyon floor. About 40 Navajo families still live in the area, farming and ranching. 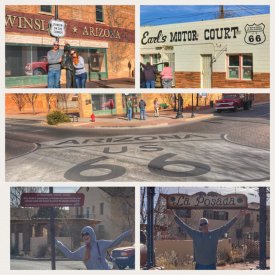 Finally, as we were preparing to leave Homolovi State Park (another wonderful Arizona park and campgrounds), we did a whimsical run along part of Route 66 into neighboring Winslow, where, with Eagles music playing in the background, we of course stood on a corner… we also did a quick tour of La Posada Hotel, a Fred Harvey hotel — one of several along the old Santa Fe Railway route in the southwest, and reveled in the history of Winslow and Route 66.