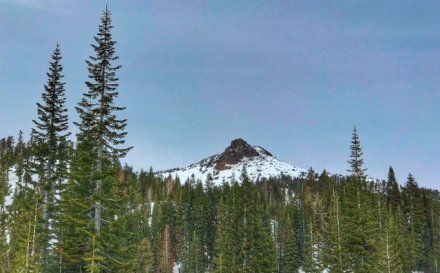 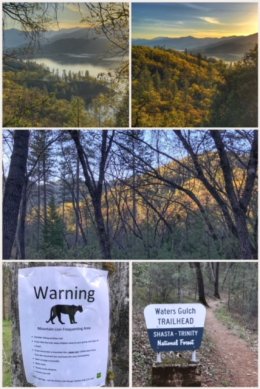 We knew this stop was all about the volcanic mountains — Lassen and Shasta — but we truly found beauty all around us. We used a cute campground in Mountain Gate, CA, just north of Redding, as our home base after traveling through the Shasta Trinity National Forest along CA-299 from our last stop in Arcata. Such a beautiful drive! We spent our first afternoon hiking around Lake Shasta, also part of the national forest … on the lookout for mountain lions while admiring views of the lake from two different trails.

Then it was time for Lassen Volcanic National Park — the ninth national park we have visited since we began this adventure. We had amazing time at Lassen, even though the main highway through the park was still closed (and will be for a while) because of deep snow. (It usually closes in November, and while they start plowing in April, it typically does not reopen until June.) 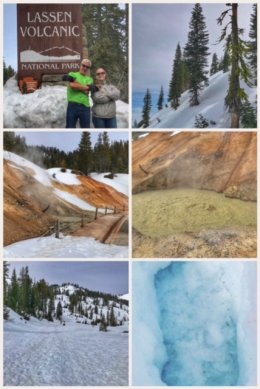 We started our Lassen adventure at the Kohm Yah-mah-nee Visitor Center, which is open year round. From there, we hiked/trudged the snow-covered Highway 89 one mile to Sulphur Works, where we were treated to bubbling mudpots and hissing sulphur steam. (Tip: if you have snowshoes or cross country skis, bring them along!)

Lassen is the ONLY place in the world where you can experience all four types of volcanoes: shield (a broad, rounded volcano built up by successive hot and fluid lava flows), composite (a volcano with multiple layers of volcanic rock, lava, cinders, and ash), cinder cone (a volcano with loose volcanic rock, cinders, and ash that accumulate around a single cone-like vent), and plug dome ( a volcano that forms when the lava is too thick to flow great distances).

Lassen Peak is one of the largest plug dome volcanoes in the world — and last erupted almost 100 years ago. 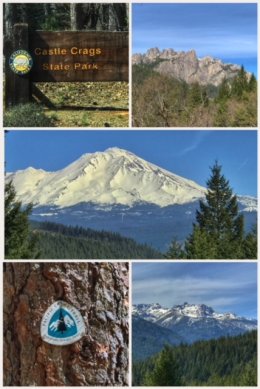 Next, we headed up toward Mt. Shasta, first stopping at Castle Crags State Park, which offers an overlook at Vista Point showcasing views of Mt. Shasta, Castle Crags, and Gray Rocks — all geological wonders. From the Vista Point parking area, we took a peaceful and enjoyable 2-mile (RT) hike on the Root Creek Trail, which crosses the Pacific Crest Trail (PCT), one of two times during this trip we crossed paths with the PCT. The entire trail is shaded by wonderful evergreens and offers the reward of admiring the tumbling Root Creek at the end (though you still have to turn around and walk back!). We did not see them yet, but in spring and early summer, orchids bloom along this trail. The park has many other trails, including Indian Creek Nature Trail, Crags Trail, River Trail, and others. We moved on, ever closer to Mt. Shasta with a stop at Lake Siskiyou, near Azalea, a man-made reservoir on the Sacramento River, formed by Box Canyon Dam. We hiked around the lake and in some nearby woods, attempting to find and hike a trail that led to a nearby waterfall. There are numerous campgrounds and resorts in the area, and while it was fairly quiet when we visited, we believe that it must be fairly crazy in the summer months.

Mt. Shasta, by the way, is still considered an active volcano… and at 14,180 feet, it is the second highest peak in the Cascade Mountain Range — and the fifth highest in California — and consists of four overlapping volcanic cones. Interestingly, it has seven named glaciers. There is no question that Shasta dominates the landscape in all directions. 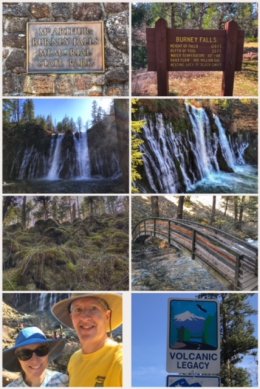 We ended this leg of the trip with what many call the most beautiful — or certainly one of the most beautiful — waterfalls in California: Burney Falls, located in the 910-acre McArthur-Burney Falls Memorial State Park (the second oldest park in the state system), located on the Volcanic Legacy Scenic Byway (Hwy 89)  — between Shasta and Lassen. The park is within the Cascade Mountain Range and Modoc Plateau, with campgrounds, picnic areas, hiking trails, and five miles of streamside and lake shore, including a portion of Lake Britton. The falls are indeed beautiful, and we hiked the entire 1-mile Falls Loop Trail, which crossed near the PCT (again), getting multiple vantage points to take in the 129-foot falls. While the park was not super crowded when we visited, we were warned that the park often fills to capacity in the summer months.

Next up… more volcanoes and lava beds!