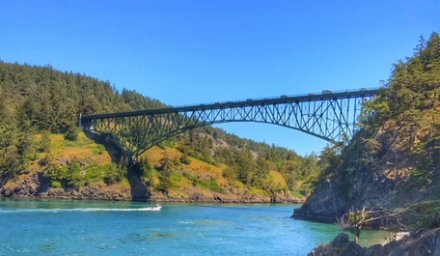 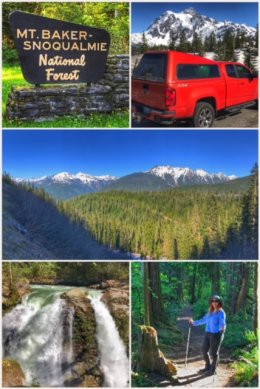 We took a few days in Bellingham to visit Ran’s son and daughter-in-law and new baby, as well as do our usual romping around the surrounding natural attractions, including Deception Pass and Mount Baker.

We started the adventure with a drive up to Mount Baker along Highway 542 (Mt. Baker Highway)… well, as far as we could drive since the highest parts of the mountain were still snowed-in, and will be for months. We made it to just beyond the ski area and admired all the mountain views. Such a glorious experience, but we want to come back in the fall some time in the future to experience Artist Point, which is said to have amazing vistas, as well as numerous trails.

On the way back we took in the dramatic Nooksack Falls, which is along the currently fast-flowing Nooksack River. Water rushes between a massive boulder, crashing down about 90 feet into a deep and rocky river canyon. (Trivia note: The falls were featured in the movie, The Deer Hunter.) The signage is weak, so look carefully for NF-33, about 8 miles east of Glacier, WA.

About 6 miles west of the falls (and about 2 miles east of Glacier), we stopped for a wonderful hike along the Horseshoe Bend Trail, which also follows along the Nooksack River. The trail is easy-to-moderate, with a few elevation changes, but worth it because the forest is lush and the river runs wild. We hiked the trail for a couple of miles before heading back to Bellingham. Plenty of more challenging trails can be found throughout the Mt. Baker-Snoqualmie National Forest, which has a ranger station in Glacier where you can get maps and additional information. 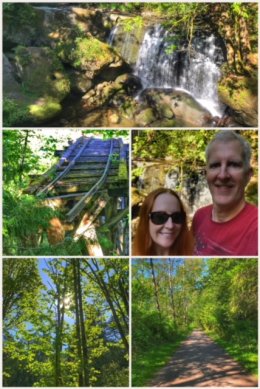 The next day found us hiking around Whatcom Falls Park, located right in Bellingham. The 241-acre park offers miles of hiking trails, including along an old railroad line. (Check out the amazing trestle, barely standing, with the rails leading to nowhere!) You can also hike along Whatcom Creek and down to the showcase — the Whatcom Falls — which you take in from a cool, old, moss-covered bridge (constructed of Chuckanut sandstone) that was built as part of the President Roosevelt-sponsored Works Progress Administration in 1939. (The creek connects Whatcom Lake to Bellingham Bay.) 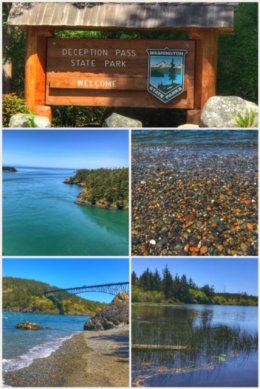 We ended this stop with a visit to Deception Pass — including both hiking along the bridge and in Deception Pass State Park. While many recognize the bridge (actually two bridges), you may not know that the area was named “Deception” by explorer George Vancouver because he mistakenly thought nearby Whidbey Island was a peninsula, leading him astray… deceiving him. Deception Pass is surrounded by Deception Pass State Park, the most visited state park in Washington — and fairly crowded on the Sunday we visited. The park was established in 1923, but greatly enhanced in the 1930s — like many other parks we have visited so far on this journey — by the involvement of the Civilian Conservation Corps (CCC) in developing trails and roads and constructing buildings. (There is even a little CCC museum/interpretive center at Bowman Bay that was originally a bathhouse built by CCC crews.)

You can find hiking, camping, fishing, picnicking, and more at the 3,854-acre park. A section of the Pacific Northwest Trail (PNT), a national scenic trail, also winds through the park. The park has 77,000 feet of saltwater shoreline and 33,900 feet of freshwater shoreline on three lakes.

Next up? A return to the Cascades — and our next national park adventure!