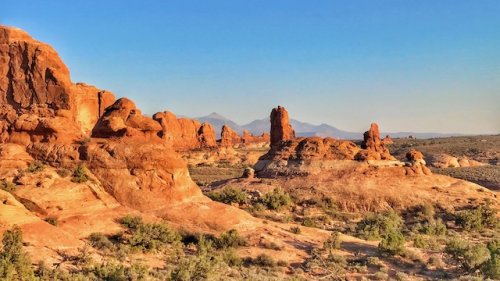 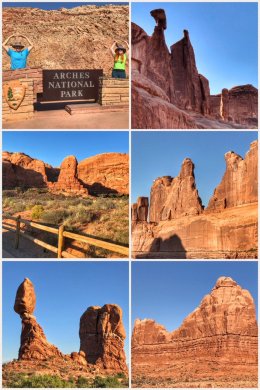 We camped at a fairly large and older RV park in Green River — the town itself old and kind of rundown — as our hub for visits to two national parks and one state park during this stop in eastern Utah.

We started this leg of the adventure at Arches National Park (national park #23), located just north of Moab. While we loved our visits to the park, we were kind of surprised and saddened to see how crowded it was this late into September. (Of course, yes, it is also good because it means more people getting out in nature and appreciating the beauty of these parks — and more tourism dollars for the surrounding towns.)

Arches National Park protects the highest concentration of natural arches in the world! This 76,679-acre park, situated in the high desert of the Colorado Plateau, has more than 2,000 natural, sandstone arches… with many accessible to view along the scenic drives, as well as on several key trails. But it’s not just about arches at this park; visitors can also see towering spires, pinnacles, and balanced rocks perched on other rocks. President Herbert Hoover granted the region protection as Arches National Monument in 1929… and in 1971, Congress made it a national park. 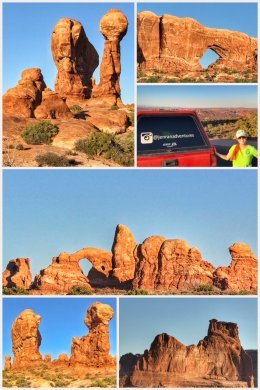 After watching the orientation video and picking up a magnet, we headed into the park, stopping at the Park Avenue and Courthouse Towers Viewpoints before continuing on to the Windows Section of the park. We also stopped at the Garden of Eden and Balanced Rock.

While we didn’t do any major hiking on our first afternoon in the park, official trails exist at Park Avenue, Balanced Rock, and Windows — along with numerous other unofficial trails up and around the sculpted rock formations.

Public service announcement: Because the park is in a desert, bring LOTS of water and fluids with you to keep you hydrated on the trails. (The park has water stations only at the visitor center and at the Devils Garden Trailhead.) 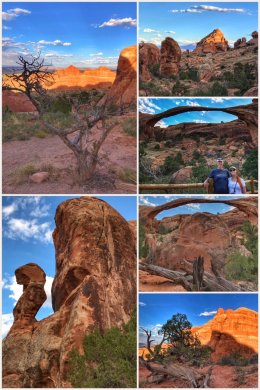 With daytime temperatures in the 90’s — and with full sun — we decided to split our two big planned hikes into early morning and late afternoon/evening. The first hike was a late afternoon trek to Landscape Arch — the  largest arch in the park at 306 feet, from base to base — about a 1.6-mile (RT) trail to the arch, with a possible side trip to Tunnel and Pine arches, as well as the option to extend the hike up to Navajo and Partition arches. The trail is located at the very north end of the park, at the Devils Garden Trailhead. The hike to Landscape Arch is fairly easy — though there are some elevation gains and sandy conditions along the trail. 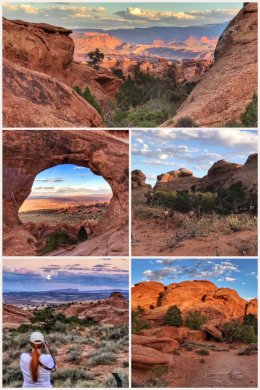 After making it to Landscape Arch, we took separate routes. Jenny wanted to capture the rising full (harvest) moon, while Ran wanted to scramble up to see Navajo and Partition arches. We both accomplished our tasks, but with a bit of stress as Ran lost cell signal and Jenny was sure he had slipped off the rocky trail. We were happily reunited — and both pleased with the photos we had gotten. Jenny captured the beautiful full moon and Ran was able to capture sunset through Partition Arch… as well as witness a very large herd of deer on a plateau near the arch. 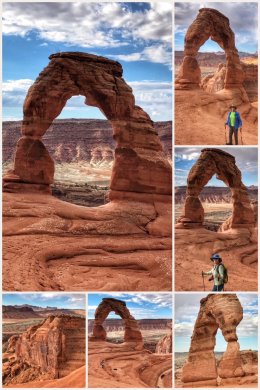 Our final visit to the park was for our early morning hike to the other well-known arch… Delicate Arch. This 3-mile (RT) hike is listed as difficult — partly because there is no shade on the trail whatsoever, and partly because of a fairly steep elevation gain of almost 500 feet up a compacted sandstone monolith, as well as a short stint on a narrow rock ledge — but we found the hike to be moderate at best. But be forewarned, this hike is popular and the parking lot fills quickly — and you will encounter many folks on the trail and lots of people frolicking under the arch when you are trying to capture its beauty. (Can you tell we are introverts?) 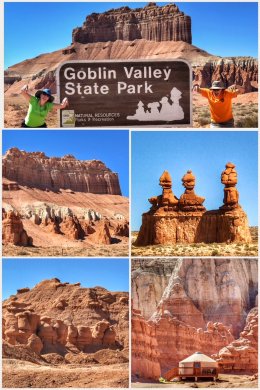 While Canyonlands National Park is in the same general area as Arches, we took a break from that area and next headed west to Goblin Valley State Park, located about 50 miles southwest of Green River. This 3,654-acre park features thousands of hoodoos — formations of mushroom-shaped rock pinnacles. Originally known as Mushroom Valley by cowboys who stumbled upon this valley of strange rock formations, the state acquired the property in 1954 and it became a state park in 1964. The park is unique and most certainly worthy of a visit. 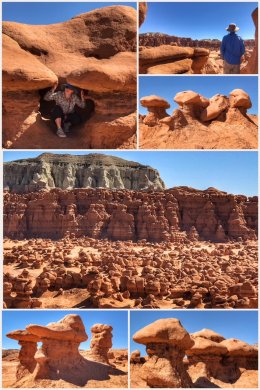 As with so much of the area we have visited in the west, the goblins (which are made of Entrada sandstone) show evidence of being near an ancient sea.

While the park has a few marked trails (all of which are fairly short — including Carmel Canyon, Curtis Bench, and Goblin’s Lair), most folks just walk down into the main goblin valley (their desert playground) from the observation and picnic area. The park also has some OHV trails (that lead into the surrounding BLM land), as well as a small campground that includes a few yurts placed in some strategic (and private) locations. 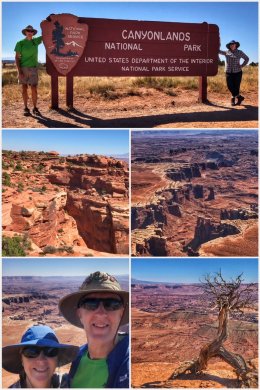 We concluded this stop with a visit to Canyonlands National Park (national park #24); or more specifically, to the Island in the Sky district of the park. The other three districts include Horseshoe Canyon, The Maze, and The Needles. In total, the park protects 337,598 acres of canyons (and sandstone cliffs), mesas, butes, fins, arches, and spires.

The Island in the Sky is the most accessible — and most visited — of the districts, and sits on a broad mesa wedged between the the Green and Colorado Rivers, more than 1,000 feet above the surrounding terrain.

The highlight of the park is the 34-mile (RT) scenic drive that goes from the visitor center to the Grand View Point Overlook. It includes about five other official overlooks and several other pullouts for short hikes and lots of picture-taking. Sadly, the views of the canyons, rivers, and surrounding mountain ranges is often a bit hazy — a combination of agriculture, wind-blown sand, and miles and miles of dirt (and dusty) roads. 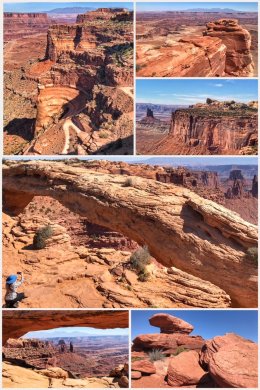 Our first stop at Canyonlands was not the visitor center, but up along the scenic drive to Mesa Arch. The hike is only about .5 miles round trip — and LOTS of people hike it. (For photographers, the best time to hike it is near sunset.) We then drove the rest of the scenic drive so that we could hike the White Rim Overlook Trail (whose trailhead is hidden in a picnic area near the end of the drive). The almost 2-mile (RT) trail is a fairly easy hike — and happily for us, was nearly empty of people. At the end of the trail, you get superb views of the Colorado River, Monument Basin, and the La Sal Mountains.

If we had more time (and energy), we would have hiked to one of the Upheaval Dome overlooks. Upheaval Dome is a unique geological feature three miles across, in which rock layers are dramatically deformed. In the center, the rocks are pushed up into a circular structure called a dome. No one knows whether it is an impact crater from an ancient meteorite or from an ancient salt bubble.

We ended our visit with a stop at the visitor center, which offers a somewhat older video — Wilderness of Rock — on a small screen. (Note to the National Park Service: Time to update this movie to HD and a get a bigger screen.) We also picked up a magnet for our fridge.

Next up a drive down to Blanding, in southeast Utah, and some visits with a few more national monuments.