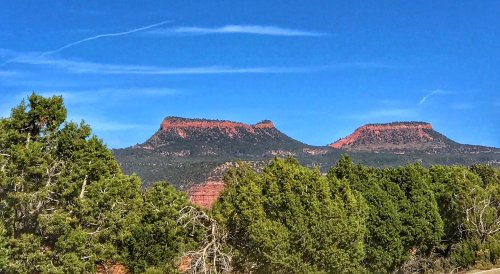 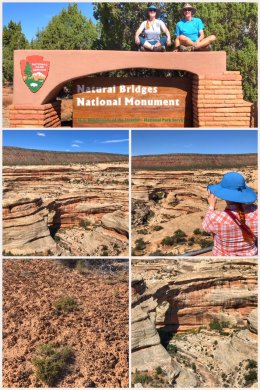 As we make our way through the rest of Utah in a clockwise direction, we landed in the cute town of Blanding… the perfect stop to view two (or more if you have the time) national monuments and explore the Four Corners area (in which Utah’s border touches three other states).

We started things off with a planned trip to Natural Bridges National Monument, designated a national monument (Utah’s first) by President Theodore Roosevelt in 1908. This 7,636-acre park, which sits on a Cedar Mesa at 6,500 feet, provides visitors with great opportunities to see three natural bridges (all of varying ages) — from accessible overlooks for those with limited abilities or time, and from hikes down closer to the bridges themselves. Each overlook is accessed via a one-way scenic drive loop that begins just past the visitor center.

In case you were wondering, a natural bridge is formed through the erosion of water flowing through a stream bed of a canyon, usually changing the flow around a meander to under the bridge (once it was been formed). 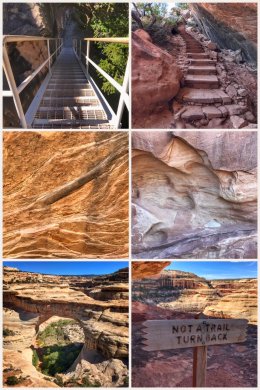 Our first stop was Sipapu Bridge, the second largest natural bridge in the world. The word comes from Hopi, in which a sipapu is a gateway through which souls may pass into the spirit world. Instead of hiking all the way to the base of the bridge — on what is described at the steepest trail in the park — we instead trekked down to a ledge overlook, located about halfway between the bridge and the scenic drive; even only going halfway, we hiked and climbed via stairs, ladders, and steep terrain. Note the sign at the end of the ledge, lest one try to go a bit farther for that perfect picture!

We did a quick stop at the Horsecollar Ruin Overlook Trail, a .6-mile trail that takes you to an edge of White Canyon, from which you can see the remains of an ancestral Puebloan cliff dwelling. 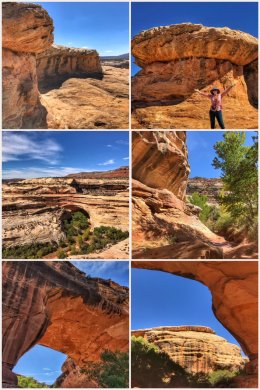 Then it was back to natural bridges and the Kachina Bridge Trail. This bridge is considered the youngest of the three bridges in the park and thus it only made sense — since Jen and Ran are both the youngest in their families — that we would hike to (and under) the bridge. The name of the bridge comes from Kachina dancers, who play a central role in Hopi religious ceremonies. The 1.5-mile (RT) hike down and up is quite strenuous and involves many, many switchbacks and stairs, with elevation changes of about 400+ feet from top to bottom. The hike is crazy hard, but pretty darn amazing — and we were proud we tackled the trail.

The final stop was at the Owachomo Bridge, the oldest of the three bridges. Owachomo means rock mound in Hopi — and the bridge is named for a rock formation on top of the southeast end of the bridge. The interesting fact about this bridge is that the creek that formed the bridge no longer flows under it, as it had for thousands of years.

By the way, for those seeking longer hikes, you can hike the Loop Trail, which passes all three bridges — leading to a hike up to about 10 miles if you do the full loop. 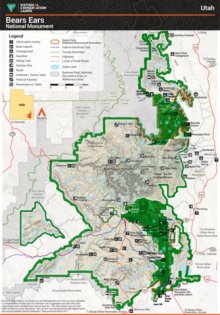 We had planned to visit Bears Ears National Monument,  established by President Barack Obama in 2016 — but the park has been cut 80+ percent in size by President Donald Trump (though numerous lawsuits are fighting the reduction) and is now limited to two little areas — the dark green areas shown on the map. Instead, we decided just to admire the Bears Ears (as seen in the feature photo at the top of the blog) — two massive buttes (rising about 9,000 feet) that can be seen for miles in the Four Corners area. The buttes are capped by Wingate Sandstone and considered sacred by a number of the area’s Native American tribes (including the Navajo Nation, Ute Mountain Ute Tribe, and Hopi Nation). 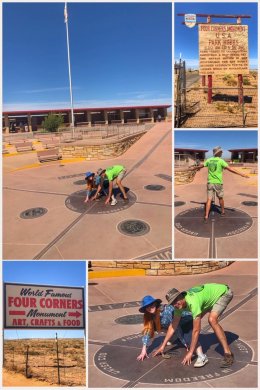 With limited time in the area, we decided we had to visit the Navajo Four Corners Monument marking the intersection of four states: Utah, Colorado, Arizona, and New Mexico. It is the only point in the United States shared by four states, and it also marks the boundary between the Navajo Nation (which maintains the monument as a fee-based tourist attraction) and the Ute Mountain Ute Tribe Reservation. The monument is located off of US-160 southeast of Blanding … and marked our first foray (of this trip) into Colorado and New Mexico, which are both slated to be visited in much greater length and detail in 2019. We had fun, as you can see in the photos, of playing a little four-state twister! If you are in the mood, you can also visit multiple vendors who surround the monument, selling everything from t-shirts and magnets to native art and jewelry. 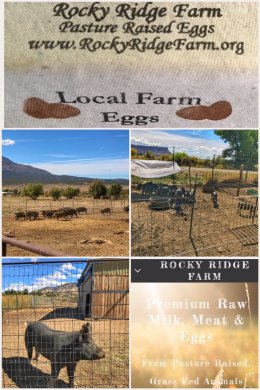 As we often like to do, after visiting Four Corners, we decided to return back to Blanding via a different route, stopping to pick up some farm-fresh eggs and Mangalitsa Berkshire pork from Rocky Ridge Farm. The farm is run by the very nice Usher family — and will soon be adding grass-fed beef to the list of products they sell (and ship). We originally found them through a great website, Local Hens: The Place to Find the Freshest Local Eggs, Means, and Produce.

As strongly as we possibly can say it, please support local farmers and ranchers who are raising food the right way: cleanly, naturally, sustainably. Avoid chickens and meats from horrible feedlots and GMO vegetables raised on RoundUp. 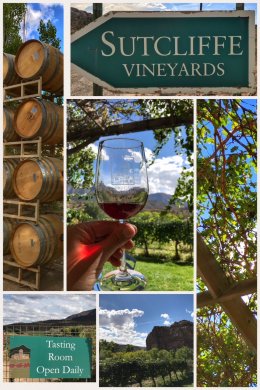 As we were heading back to Utah from Colorado (and really planning to stop at Hovenweep National Monument), we stumbled upon Sutcliffe Vineyards — and wine-tasting won over visiting six prehistoric buildings. We were immediately greeted by owner John Sutcliffe, a quite amusing Welshman who now has a lovely vineyard in western Colorado’s McElmo Canyon (located on Road G, west of Cortez) that produces about 5,000+ cases annaully. We actually tasted a few whites (which we almost never do), along with a few reds… and we left with a one bottle each of a red (field) blend, a 2016 Cinsaut (which we are saving for Thanksgiving), and a 2015 Cabernet Sauvignon. John’s reds are quite delicious — and if we had more room in the travel trailer, we might have bought more! If you are in the area, this winery is a must-stop — both for the wine and for John. Check out their website for more information: Sutcliffe Vineyards.

Next up for us? Cruising down to Monument Valley, home of the Navajo Nation and many westerns — movies produced by John Ford from the late 1930s to the 1960s.