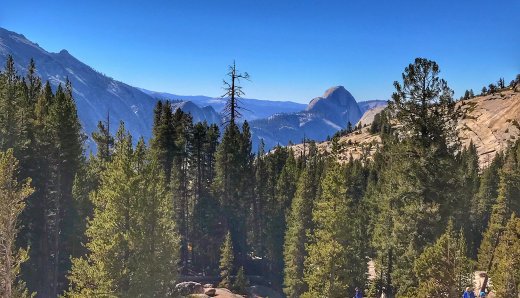 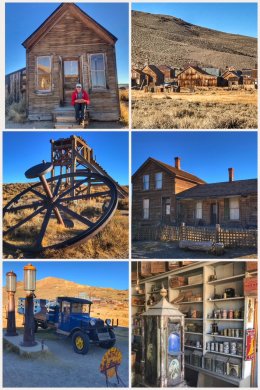 We traveled from Tonopah, Nevada, to Lee Vining, California, to spend several days in and around the Eastern Sierras, including visits to Bodie, Mono Lake, Inyo National Forest, Mammoth Lakes, and — of course — Yosemite National Park.

We started the adventure by visiting the site of a once-booming gold and mining town, now preserved as a state historical park — and ghost town. The town of Bodie once had nearly 10,000 residents — all in the search of gold, or supporting those who were searching for gold. But a few short decades later, with the mines depleted, the town had shrunk to 1,500 people… it bounced back for a while, but a massive fire in 1932 destroyed about 90 percent of the town, and the town faded away in the 1940s. Designated as a National Historic Site and a State Historic Park in 1962, the remains of Bodie are being preserved in a state of “arrested decay.”

It was fun walking down Main, Fuller, Green, and Union Streets — and visiting about 30 buildings, including the church, schoolhouse, hotel, hydro building, stamp mill, and numerous houses. As with most state parks, there is an admission fee, but it is most certainly worth it — especially if you like peeking into the lives (or at least the buildings) of people from years long ago. 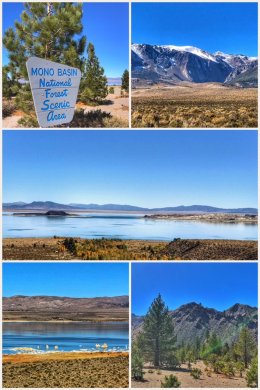 Mono Lake, which is unique and spectacular (with a little sadness too) for several reasons. First, this large lake is the last remaining part of the massive ancient Lake Russell, making it more than a million years old — and one of the oldest lakes in North America. Second, because it has no outlet, all the minerals build up in the lake making it now about 2-1/2 times as salty as the ocean and very alkaline. Third, the lake has spectacular tufa towers — calcium-carbonate spires and knobs formed by interaction of freshwater springs and alkaline lake water. Fourth, it is a major habitat for migrating birds, attracting 1-2 million birds annually. Fifth, the lake has been hurt by governments diverting water from the lake to Los Angeles. We recommend stopping at the Mono Basin Scenic Area Visitor Center, located just north of Lee Vining. For up-close viewing of the tufas, make sure you walk the one-mile self-guided nature trail at South Tufa. 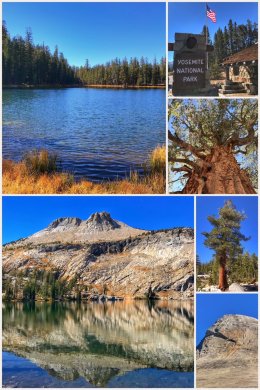 Next up was a ride up Tioga Pass and into the east gate of Yosemite National Park — park #26 on this grand adventure! Established in 1890, this 761,268-acre park is known for its giant sequoia trees,iconic granite cliffs of El Capitan and Half Dome, and Yosemite Falls — the tallest waterfalls in North America.

We had both been to Yosemite Valley before, but Ran had never experienced the drive up and into the Sierra Nevadas and the park. Our goal for this visit to the park was to visit Tuolumne Meadows, Tenaya Lake, Lembert Dome, and Olmstead Point… as well as hike to May Lake and Lukens Lake. Both lakes are wonderful in their own way. May Lake is overlooked by Mount Hoffman — and the hike a fairly moderate 3 miles roundtrip. The hike to Lukens Lake is shorter and easier at a bit under 2 miles — and the lake completely different (surrounded by evergreens and pasture). 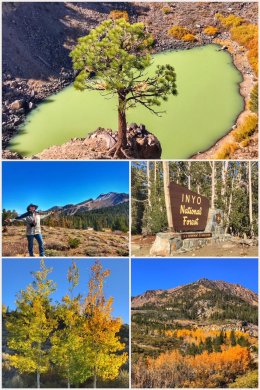 Next up was some scenic driving through the Inyo National Forest on our way to Mammoth Lakes. While we only visited a small section of this massive (2+ million acres) national forest, it certainly lived up to its name — a “dwelling place of the great spirit.”

Once such dwelling place is the Inyo Craters (three phreatic explosion craters on the summit and south flank of Deer Mountain, with the two on the flank containing small lakes.) The hike to the first crater is a lovely 1-mile trail through a Jeffrey Pine forest — but getting to the trailhead is a bit of a pain on a fairly rough dirt road.

As we traveled through this national forest, we were also treated to more autumn colors — and temperatures too! (In fact, in Lee Vining, the temperature dropped to 18 one night!) 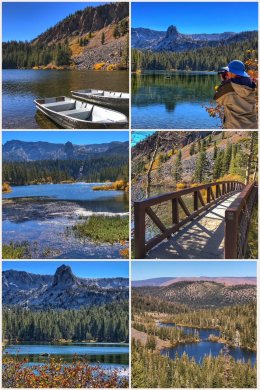 We ended the visit to the Eastern Sierras with an exploration of the Mammoth Lakes. While Jenny has been visiting and skiing Mammoth Mountain for much of her life, she always visited in the winter when the lakes were frozen and the roads closed. The lakes were created long ago, as massive glacier moved and shaped the land.

While there are some amazing trails (including the Pacific Crest Trail and John Muir Trail, as well as the wonderful Lakes Basin Path) in the area, we decided to drive from lake to lake, starting with Twin Lakes ( a set of connected lakes), and continuing on to Lake Mary, Lake Mamie, and Horseshoe Lake. From Lake Mary, you can get a good look at Crystal Crag — a giant granite formation that stands at 10.305 feet.

We had hoped to visit Devils Postpile National Monument while in Mammoth Lakes, but road construction has the park closed until 2019.

Next up? A challenging climb over and through the Sierras to reach the foothills on the west side, stopping first in Pine Grove, California — and then Mariposa.