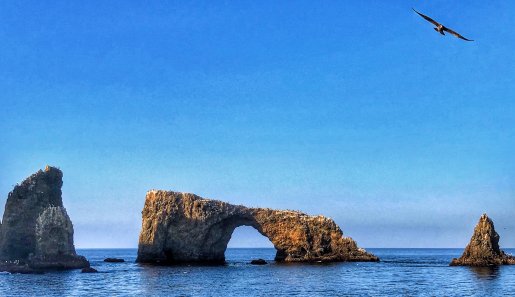 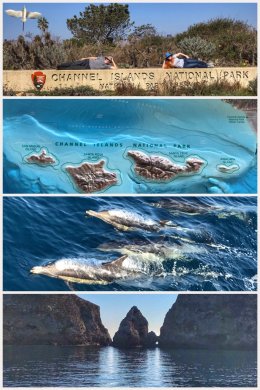 Channel Islands National Park — the 27th national park we have visited on this grand adventure — is one of a handful of national parks only accessible by boat or plane.

The park, established in 1980, consists of five islands — San Miguel, Santa Rosa, Santa Cruz, Anacapa, and Santa Barbara — along the Santa Barbara Channel off the coast of California, with the water surrounding the islands a National Marine Sanctuary. (Fun fact: Anacapa and Santa Barbara Islands were first protected when President Franklin D. Roosevelt signed a proclamation in 1938 designating them as Channel Islands National Monument.)

The Channel Islands are unique — and protected — because it is a place where warm and cold currents meet, creating one of the most diverse concentrations of marine life in the world, supporting more than 2,000 marine plant and animal species — from giant kelp forests to whales and dolphins and marine birds.

The islands are also important to human history, providing the earliest paleontological evidence of humans in North America. Later, the native Chumash people lived for thousands of years on the northern islands, as well as along the Santa Barbara coast. For a time, the islands were also used for cattle and sheep ranching and for military installations.

The national park has visitor centers in Santa Barbara and Ventura. We went to the main one in Ventura, the Robert J. Lagomarsino Visitor Center, which has an observation tower, a bookstore, a display of marine aquatic life, and exhibits featuring the unique character of each park island. We of course also watched the movie, A Treasure in the Sea before purchasing our magnet.

To get to the actual national park, one either has to have a private boat or use one of the concessionaire boats (Island Packers) or planes (Channel Islands Aviation). We chose to go by boat, and Island Packers has ships that go to several of the islands, but the one that best fit our plans was a wildlife adventure cruise to and around Anacapa Island. (Island Packers is located about two blocks from the park’s visitor center.) 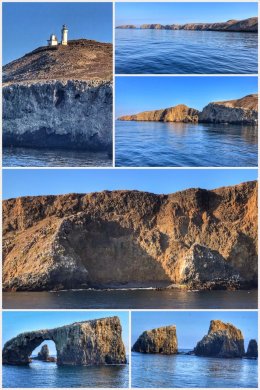 The day we went was near-perfect! Calm seas, blue skies, and little haze. Heading out and returning, we were treated to visits by hundreds of dolphins, including many adults with juveniles swimming alongside! We had hoped for another whale sighting, but it was a bit early for the whales to be back in the waters near the islands. We did see many sea birds, including brown pelicans, as well as several groups of sea lions lounging on the beaches of the island.

Seen in the collage, and completed in 1932, the Anacapa Island Lighthouse is located on the highest point of East Anacapa Island. At the top of the 39-foot concrete cylindrical tower is a third-order Fresnel lens, one of the most advanced lighthouse beacons in the world. The lighthouse was needed because of the many ships that used the channel as a shipping land — and that got lost in the fog and weather, with numerous shipping accidents and shipwrecks.

As we ended this wonderful visit to the Channel Islands, we were reminded of what we can do to protect the oceans: 1. eat only sustainable seafood; 2. treat ocean creatures with care; 3. pick up trash near beaches, creeks, and rivers; 4. reduce use of plastics; 5. use biodegradable products; 6. use less fertilizer; 7. support marine protected areas.

Up next? One more national park to visit in 2018 — Joshua Tree National Park.