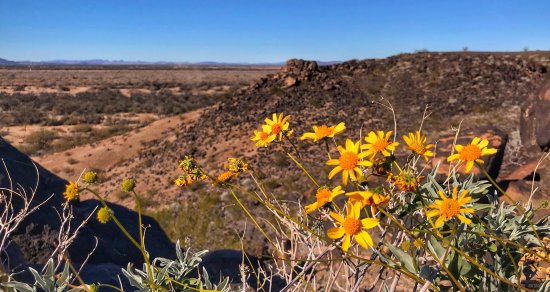 What do you do when you refuse to travel more than a few hours a day but you need to get to New Mexico by the start of 2019 to start the next leg of your journey? You revisit southern Arizona along the way! We made three wonderful — and surprising — stops in southern Arizona before we officially restart the cross-country trip January 1. (As some may recall, we spent several weeks visiting Arizona in January 2018.)

Our first stop was in the southwestern part of the state in Dateland, which is a bit of a tourist trap… with a store full of all sorts of souvenirs; but, we were drawn to the dates, which they actually grow and harvest on the property. We ended up with a little container of almond-covered dates — yes, that is the sum of the ingredients…. dates rolled in nuts.

The Dateland RV Park is something to experience, but at $18 a night — and one of the few folks in the park — one does not complain. Let’s just say that most folks just stay one night and move on to the next stop. We stayed two nights, which led to one of the best discoveries of our adventures!

The biggest surprise of our visit to Dateland was discovering Sears Point, along the Gila River, and located on lands managed by the Bureau of Land Management (BLM). Happily, no government shutdown was going to stop us from checking out what the BLM protects: thousands of petroglyphs pecked into the volcanic basalt mesas and stone panels by prehistoric Native Americans. In reality, there are three styles of petroglyphs at Sears Point: Western Archaic Tradition, Gila, and Patayan. Sears Point is one of several rock art sites located almost parallel to Interstate 8 between Yuma and Gila Bend that encompass 2,008 petroglyph panels containing at least 9,742 petroglyphs! The Desert Archaic, Patayan, and Hohokam were among the variety of cultures believed to have used the area, and it is possible remains here date back to the Paleoindian period.

The Gila River floodplain was a fascinating place to hike — a massively wide area filled with smooth (and very shiny) river rocks… as well as big chunks of volcanic rock scattered all about. The river used to run freely, and for thousands of years indigenous people lived and farmed near the river. The Gila Trail runs along this area. Today, the river is a fraction of what it used to be as water has been diverted to serve the Phoenix and Tucson metropolitan areas.

Next up was a return visit (and an overnight camping stop) at Picacho Peak State Park, located along Interstate 10 between Casa Grande and Tucson. We spent a few nights here back in January, but loved the park so much, we had to make a return trip.

The main feature of the park is the 1,500-foot peak of Picacho Peak — which can be seen for miles. The park offers camping, group camping, and several picnicking areas, but the highlight for us are the trails. Months ago, we hiked the Nature Trail and Calloway Trail, located in the southern end of the park. On this visit, we hiked the Sunset Vista Trail, which starts on the northern side of the park and winds along the southwestern side of the mountain — from which you can hike all the way to the top of Picacho Peak (an elevation of 3,374′).

We ended our short tour through southern Arizona with a return stop to Willcox, home of one of three of the state’s wine regions — and the area where the vast majority of the grapes are actually grown. During this visit, we decided to focus on some of the smaller wineries… and were rewarded with wonderful tastings at Zarpara, Birds & Barrels, and Bodega Pierce — all located southeast of Wilcox along the Willcox Bench Tasting Rooms just off Kansas Settlement Road. Zarpara offers some lovely and unusual reds, and we left with a bottle of 2015 Monastrell and a 2014 Origen. More importantly, they suggested we visit Birds & Barrels, run by Chad and Monica Preston, a lovely couple just getting started on developing wonderful, hand-crafted wines. We had a tasting flight of three wines — their entire selection this year — and left with smiles on our faces and a wonderful bottle of white wine. We ended our tasting at Bodega Pierce, where the owner, Dan Pierce, entertained us with stories of his passion for wine — and educated us on the vast number of varietals he grows in his vineyard. We fell in love with a number of his wines, leaving with half a case of red, including the 2016 Athena, 2014 El Coraje, and 2014 Gallia.

A funny highlight of the wine-tasting was driving along one of the back roads when a javelina ran across the street right in front of the truck. Javelina are in the peccary family — and common in much of central and southern Arizona.

By the way, if you will be near Willcox in February, consider visiting February 16, 2019, for the Off the Vine Arizona Wine Festival — which will include 25 wineries, food trucks, vendors, and live music.

But the highlight of Willcox — and perhaps the entire revisiting through Arizona — was discovering that more than 25,000 Sandhill Cranes make Willcox their winter roosting area. These amazing and elegant birds that are gray-bodied and crimson-capped  — some with wingspans of 6 feet — date back to the Pleistocene nearly 2 million years ago. (The earliest Sandhill Crane fossil, estimated to be 2.5 million years old, was unearthed in the Macasphalt Shell Pit in Florida.)

The cranes spend their winters just south of Willcox, migrating from points north (including all the way from Siberia), though you can see them — and hear them — flying overhead in town too.

Sandhill cranes hold a special place in our hearts for their grace and beauty, for their unique bugling call, and because they mate for life. Amusingly, their dating ritual includes stretching their wings, pumping their heads, and leaping into the air — the dance of love and mating! (No relation to the dating and marriage rituals of Ran and Jen!)

We visited the Whitewater Draw WIldlife Area, just southwest of Elfrida (and about 45 miles south of Willcox). The park has no entry fee, and includes a lovely trail (with a few viewing platforms) from which you can see thousands of roosting cranes, as well as ducks and other waterfowl. We also visited the Willcox Playa WIldlife Area, along Kansas Settlement Road (and just north of the wineries we visited the day before). But you can also see the cranes in numerous corn fields along the drive between Willcox and Elfrida.

If you are in the area in January, consider stopping by for the
Wings Over Willcox Birding & Nature Festival, held every year during the Martin Luther King Jr. holiday weekend.

Finally, if you are in the Willcox area, you simply must visit Chiricahua National Monument, southeast of Willcox. (Read more in our blog post from January 2018.)

And that ends our amazing year of 2018! We head to New Mexico and beyond starting on Tuesday, January 1, 2019. We had some amazing experiences in 2018 and wish all of you a wonderful, happy, healthy, and adventurous 2019.