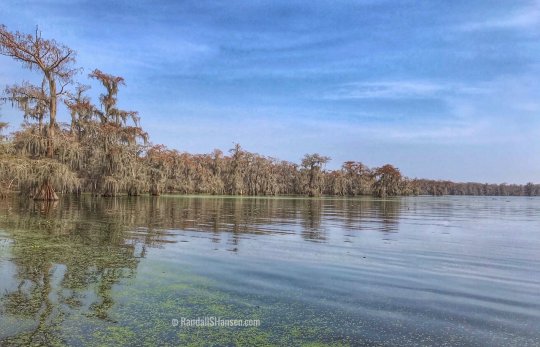 We left Texas for Southern Louisiana, the land of the “sportsman’s paradise” so named because of the diversity of fish, wildlife, and water in the area — including rivers, lakes, swamps, wetlands, and the Gulf of Mexico… and, of course, bayous!

Louisiana, the 15th state we have visited since the start of this road trip, is such an amazing mix and true blending of cultures — a melting pot of French, African, American, and French-Canadian cultures reflected in Acadian, Creole, and Cajun cultures.

We started our short tour through Louisiana in Lafayette, on the West Gulf Coastal Plain in the south-central part of the state. The city of about 125,000+ residents is considered the cultural center of the state.

After many folks suggested it, the biggest — and most fun — activity we did while in Lafayette was to go on a swamp tour! After much searching, Jen chose Cajun Country Swamp Tours because of their focus on eco-tours that respect the environment while also educating participants on the plants and animals in the bayou. Located in Breaux Bridge, east of Lafayette, the 2-hour tours actually take place on Lake Martin.

We were NOT disappointed. Our tour guide Bob had both a great sense of humor and a great knowledge of nature, and as we cruised to different parts of the lake, we saw turtles, commorants, blue herons, osprey, bald eagles… and lots of alligators — from tiny juveniles to full-size adults.

We also celebrated our second wedding anniversary while in Lafayette, enjoying a nice cajun dinner at Don’s Seafood — with a menu selection that included blackened alligator as an appetizer, the first time either of us has ever eaten it.

Then it was on to the Big Easy, the Crescent City, the Birthplace of Jazz, N’Awlins… New Orleans! For many decades, the largest and most important city in the south, and the city with the most historic districts in the U.S.

We spent our first night in New Orleans taking in the sights — all the sights — of the French Quarter, the historic heart and soul of the city… full of colorful storefronts with bright lights, music erupting from every nook and cranny, people hanging out on balconies on nearly every building, unique street performers, and many intoxicated and uniquely dressed people… all of which you can see in the photos in the collage. We had a blast people-watching that first night. We also walked to Jackson Square and St. Louis Cathedral — where on this night it was filled mostly with psychics just waiting to tell our fortunes. By the way, no, we did not consume any Hurricanes, Hand Grenades, Sazeracs, or Daiquiris while people-watching in the French Quarter — but LOTS of other folks were certainly imbibing in numerous alcoholic beverages!

The French Quarter is the oldest part of the city, and is also known as the Vieux Carre (Old Square), and although founded by the French in 1718, it also reflects the art and architecture of the Spanish.

Arriving in mid-February, we expected to miss most of the Mardi Gras craziness, but we soon discovered the “season of Carnival” started back in early January — and parades had already started, and would continue up through Mardi Gras, or “Fat Tuesday,” which is the last day of the Carnival season — and which always falls the day before Ash Wednesday, the first day of Lent. Mardi Gras has been openly celebrated in New Orleans since the 1730s… a bit (or a LOT) of decadence before the sacrifices of Lent.

While in New Orleans, we stayed at an RV park outside the city, not far from the University of New Orleans — where Ran interviewed many years ago for a teaching job. Because we did not want to deal with parking in the city — especially with Mardi Gras parades and festivities already in celebratory mode — we used Lyft several times and were mostly happy with the ride service. (We mostly use Lyft over Uber because Jen drove for Lyft briefly and because we always like supporting the underdog!

We also decided we would do a city tour to learn more about New Orleans, and chose the Sightseeing New Orleans Hop-On, Hop-Off tour because it allowed us to visit New Orleans at our pace — and choose which areas to explore on foot in more depth.

You can buy a one-day or three-day pass — and literally get on and off at one of 18 stops… including the French Quarter, Garden District, Arts District, Treme, Louisiana Superdome, Mardi Gras World, Convention Center, and World War II Museum. It is a great way to explore the city — and each bus has a live tour guide offering interesting narration and New Orleans trivia.

We hopped on at the Basin Street Station (where you can park for $10 a day — and the parking seems pretty safe), after catching a Lyft from the New Orleans Costco (where we were getting our tires rotated and balanced). The station also has a nice gift shop and clean bathrooms.

We hopped off in the Garden District, renowned for its oak-lined streets and 19th century Victorian homes with well-manicured gardens. It is also a self-contained neighborhood, with Magazine Street one of its commercial centers for galleries, shops, and restaurants.

Laid out in the early 1880s by city planner Barthelemy Lafon — when ancient Greek was still the style — as an open, semi-urban system of interrelated parks with basins, fountains and canals. The Garden District has been called “one of the earliest expressions of the Greek Revival to appear in New Orleans,” according to noted architect, the late Samuel Wilson, Jr. The streets still bear the names of the nine muses of Greek Mythology (Urania, Thalia, Euterpe, Calliope, Clio, Erato, Melpomene, Terpsichore, and Polyhymnia), and many of the mid-19th century Greek Revival and Italianate homes remain.

While in the Garden district, we walked along Washington Avenue (of course!) to spend some time exploring another of the must-do aspects of New Orleans: visiting one of their historic cemeteries. We chose to visit the city’s first (oldest), Lafayette Cemetery #1. Founded in 1833 — and still in use today — the cemetery takes its name from its location in what was once the City of Lafayette, a suburb of New Orleans that was annexed in 1852. Situated within a single city block (Washington, Sixth, Coliseum, and Prytania), the cemetery contains approximately 1,100 family tombs and 7,000 people. The Cemetery was placed in the National Register of Historic Places on February 1, 1972, for its architectural and social-historical importance, though it is sad to see the dilapidated state of some of the tombs (both from age and Hurricane Katrina). Interview with the Vampire, Double Jeopardy, and other films have been shot in the cemetery.

Speaking of filming, Louisiana has reversed a 2015 tax change that caused New Orleans and other areas to lose movie locations to Atlanta. Like New Mexico, Louisiana now has tax incentives to film in the state — and several movies are in pre production, including another X-Man movie and a Tom Hanks World War II movie.

And speaking of World War II, the museum — which opened in 2000 — is one of the top draws for the city, and rated as one of the best of its kind. It includes immersive exhibits, multimedia experiences, and an expansive collection of artifacts and first-person oral histories. Located in the Central Business District, it was designated by the U.S. Congress as America’s official World War II museum.

We ended our city tour hopping back in the French Quarter, which is much tamer in the daylight hours. We again spent some time in and around Jackson Square, a historic one-block-square park — and the site where in 1803 Louisiana was made United States territory.

We fortified ourselves with beignets and chicory coffee at Cafe Beignet. (We debated long and hard about whether to eat there or the traditional and touristy Cafe Du Monde, and decided on Cafe Beignet for the ambiance and live music — and variety of menu. Note for history buffs: Cafe du Monde is the oldest establishment making beignets, beginning in the French Market in 1862.) Beignets — hot, fried square pieces of dough sprinkled heavily with powdered sugar — is a New Orleans tradition… and must be done in some degree, even for those with sugar and gluten issues. The chicory coffee is fine (and quite strong), but we prefer our coffee drink the best.

The other popular pastry — at least during Carnival season — are King Cakes, which are colorfully decorated cakes (in purples for justice; greens for faith; and gold for power) — with a small baby hidden inside. The baby was originally meant to symbolize the baby Jesus. In typical New Orleans style, finding the baby symbolizes luck and prosperity, but also comes with the responsibility for purchasing the next King Cake and/or for throwing the next Mardi Gras party… and on the celebrations go!

One final note about pastries… in every town we have visited in Louisiana, one can find at least a gas station, a dollar store, and a doughnut shop — and many times, several doughnut shops. Folks in the south sure seem to love their sweet pastries… of all varieties! We are still pondering why, so if you know the answer, please enlighten us!

We also visited several other places around the French Quarter, including the New Orleans Historic Voodoo Museum on Dumaine Street, as well as the French Market on Decatur Street. The French Market, an open-air market/bazaar is the oldest of its kind in the U.S., and spans six blocks; it was originally founded as a Native American trading post along the Mississippi River in 1791.

New Orleans has an energy and culture all its own — and in the French Quarter especially, music is everywhere, from the streets to every bar and eatery. We generally are avoiding larger cities on this trip, but there are certain ones that cannot be skipped — and New Orleans is obviously one of them.

But, as we leave Louisiana and the excitement of New Orleans, we are also happy to be returning to quieter places — and places of nature — starting next with Mississippi.