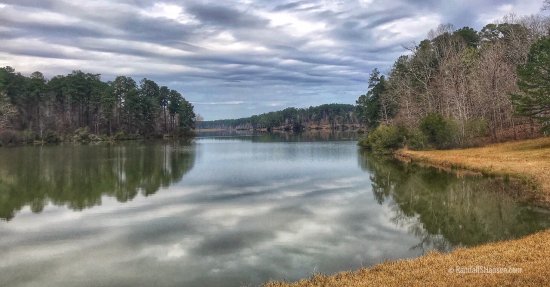 We happily left the fog and humidity of Biloxi and traveled throughout the rest of Mississippi, stopping in each of the major regions of the state — up through the Gulf Coast to the Pines, continuing on to the Hills, and finally through the Delta on our way to Arkansas.

We first paid a visit to Columbia, named after the city in South Carolina from which many of the early settlers had migrated. While it is the county seat of Marion County, it is like many of the other small towns we have seen on the trip: a bit rundown and perhaps past its heyday (though we should note that it was also hit pretty hard by Katrina in 2005). It is located along the Pearl River (and always in danger of flooding)… and our campground sat right on a bend of the river. The weather was mostly sunny while we were there, and we were blessed with being able to get out for two wonderful hikes.

We started with the “Grand Canyon of Mississippi.” Simply called Red Bluff, and located near Foxworth, this quite beautiful geological wonder (caused from millions of years of erosion from the Pearl River) is more than 150 feet deep, half a mile wide, and nearly a mile long… and amazingly located on private land, but open to the public. Because of a shift in elevation, the vista from along the top is wonderful — of not only the bluffs, but the surrounding area. The beautiful colors of the bluff comes from red clay, soil, sand, and other sediments. Mississippi Road 587 used to run around the bluff’s edge, but as can be seen in the collage, the road has partially collapsed and is now closed on both ends — which is where you park when visiting Red Bluff. Rough trails can be found on both the east and west sides — and we walked parts of both. You can also climb down to the bottom, but be forewarned that the hike down is about 350-400 feet. Once at the bottom you can choose to either explore the canyon and climb up and over some of the smaller bluffs… or head toward the Pearl River and walk the train tracks, as well as explore the train wreckage that still lies next to the railroad tracks where it derailed years ago.

From there, we decided to explore a small part of a nearby rail-trail, Longleaf Trace. This Hall of Fame and National Recreation Trail runs almost 43 miles between Pentiss and Hattiesburg. Constructed in 2000, the paved trail follows a portion of the abandoned Mississippi Central Railroad line (which hauled timber on the line), and includes nine stations along its route. We entered the trail at the Bassfield Station. The trail is paved and well-maintained.

We were happy to find the trail, as we love supporting all trails, but have a special place in our hearts for rail-trails, imagining those trains once traveling the route we now hike or bike. We hiked a few miles on the trail — and it is indeed worthy of its recognition. As we move forward on the rest of the trip — especially in warmer months — we expect to find ourselves enjoying many other rail-trails across the country. (Here’s a list of some of our must-see rail-trails around the country.)

From Columbia, we traveled into the Pines and the town of Meridian, the sixth largest city in the state; the drive through large and dense pine forests was indeed wonderful, but we found the true joy of the trip within the city itself — a 3,300-acre park that houses three “lakes” (reservoirs) and multiple other smaller ponds.

We actually spent two days visiting the park. We first enjoyed an afternoon hiking around the lower lake. The following day, we tackled the full, almost 6-mile loop trail around all three lakes, which travels in woodlands and near the banks of the lakes — and has more elevation changes than one might expect. Amazingly, we only saw about four other people during the entire hike!

The park also has numerous other trails for mountain-bikers and horseback-riders. Furthermore, the park offers picnic facilities, boat ramps, and a playground. (It is also home to official city firework festivities.)

We then headed to the Mississippi Hills with a stop at Oxford… but we found the city too crowded and the RV park too rundown to warrant staying more than a day. The city was named after the one in Britain in hopes of luring a major university… which it did in the University of Mississippi, known affectionately as “Ole Miss.”

We ended our visit in the Mississippi Delta, with a visit to Greenville — hometown of Muppets creator Jim Henson, who some would say was a creative genius. Sadly, he also died young and suddenly at age 51, from toxic shock syndrome.

We had hoped to stop and visit at the Jim Henson Delta Boyhood Exhibit, but found it closed (even when their website said it was supposed to be open). It may have been closed due to the flooding — which we saw throughout the Delta. Seeing so many homes and farms under water and/or surrounded by water was disheartening. The area has simply had too much rain, and rivers and creeks are overflowing their banks and the ground very saturated.

We ended the visit to Greenville on a happier note, taking a short hike through several cypress brakes at the Greenville Cypress Preserve, which consists of three stands of cypress trees in sloughs, a meadow, and a mixed tree woodlands. (By the way, a slough, pronounced as “slew,” is a wetland depression or swamp in which cypress trees grow; colloquially, a cypress slough is called a “brake.”) Amazingly, a volunteer told us that we had arrived on the perfect day — that it had just dried out enough so that the trails were not under water! We hiked the full loop Cypress Trail, which is only .5-miles.

Why the need for a preserve? During the 1900s, bald cypress trees were over-harvested and their numbers greatly diminished — mainly because the lumber produced from the trees has long been valued for its resistance to water and rot. The trees in this 16-acre preserve were luckily saved by the forward-thinking of the Greenville Garden Club — and now cared for by the members of the non-profit Greenville Cypress Preserve.

One of the wonderful aspects of our time in Mississippi has been enjoying and documenting the arrival of spring. Trees are budding and blooming (especially the magnolia trees), and flowers and bushes are bursting with colors.

We truly know how blessed we are to be able to travel against the seasons — spending winter months in warmer, southern climates — and enjoying summers in the northern states. Plus, the way we are traveling, we get to experience a much longer spring, while only occasionally dealing with cold and freezing temperatures.

Next up, we cross into Arkansas — on the hunt for our next (finally!) national park!