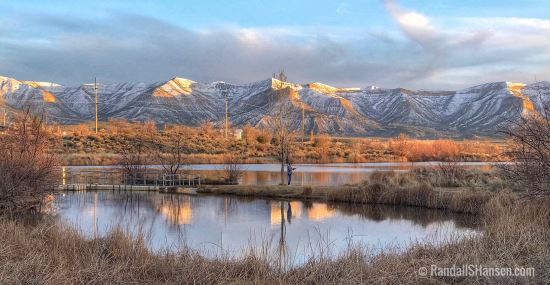 This leg of the adventure is all about learning and experiencing the culture of the Anasazi — the “ancient ones” who dominated the Colorado Plateau for hundreds and hundreds of years — during a stop in the southwestern corner of Colorado.

The trip from Alamosa to Cortez was a long one by our standards — close to 200 miles, all along U.S. Highway 160 — and over one of the steepest mountain passes at Wolf Creek, on the Continental Divide, at just under 11,000 feet. It was crazy to see so much snow — and the ski resort there still open. After a bit of a scare about our brakes on the way down from the pass, we made it to Cortez in one piece, and happily set up camp and made a quick trip to Mesa Verde National Park — the 35th (out of 49 in the continental U.S.) we have visited thus far. The Visitor and Research Center is located just off U.S. 160, about 10 miles east of Cortez. We picked up our map, hiking information, and our magnet — but had to save the movie for the next day, as the film is shown at the Chapin Mesa Archaeological Museum, deep in the southern end of the park.

With just enough time left in the day, we decided to celebrate our safe arrival with some wine tasting at Guy Drew Vineyards — and we are so happy we did! The 155-acre vineyard is located on County Road G in the McElmo Canyon, southwest of Cortez, and its an experience not to be missed.

The family-owned vineyard follows thoughtful and practical land stewardship practices and has as its mission to “make unique and amazing wines that embody the beauty of Colorado.” As you can see from the pictures, the vineyard also offers amazing vistas.

We met up with Guy late in the afternoon and had a wonderful discussion of wines, wine-making, water rights, and much more. We ended up leaving quite past the 5 pm closing time, but happily Guy did not seem to mind — and we were enjoying his wines and his company. We are red wine lovers, but did try two of his whites before falling deeply in love with several of his reds, including the 2016 Cabernet Sauvignon, 2015 Syrah, 2015 Metate, and 2017 Lil’Mischief. The first three were amazing dry reds, while the fourth is a a semi-sweet blend of Merlot and Baco Noir… we left with 3 bottles of each — a full case of deliciousness. (We had just shipped off a case of wine back to our climate-controlled storage unit, so we had some room in the trailer; but we also definitely plan on saving a bunch of these reds — especially the Cab and Metate — so some of them will soon be heading to the storage unit.)

The vineyard is open daily from noon to 5 pm — and the perfect place to stop for fine wine and conversation after exploring the area. (If you so choose, you can also taste at another nearby winery — Sutcliffe Vineyard — further west on County Road G, almost directly across from Sand Canyon. We tasted there last year when we spent a brief amount of time in the Four Corners area.)

But if Guy Drew’s wines were not enough to make us love Cortez, then two local establishments sealed the deal. Located a block apart on Main Street in downtown sits the newly reopened (and renamed from Cortez Meat Market) Frederick’s Craft Meat Company and flat belly (fb) Organics.

We fell in love with Frederick’s and Ran stood in front of the meat counter dreaming of a larger freezer. The store specializes in local meats raised (properly) in and near Montezuma County. They had just opened the new store the day we visited, and we left with Mangalista pork chops, pork medallions, pork loin, and some lamb chops… along with a dozen fresh eggs. They also plan to have beef and chicken in the future — once they secure suppliers doing the meats the right way. The people are great, the prices are fair, and the meats are amazing. Love it!

At flat belly, which is the typical small town natural food market offering a selection of supplements and organic foods, with a small selection of frozen and refrigerated items, we left with a package of local ground yak (!!), and a few bags of our current salted goodies: Siete Sea Salt Grain Free Tortilla Chips and Lesser Evil Paleo Puffs. The prices were a bit high, but also typical of these smaller organic/natural food stores.

After getting our fill of wine, meat, and snacks, we were ready to tackle the rest of Mesa Verde National Park!

The park has an interesting history. Several people in the late 1800s had stumbled upon the ancient ruins of the Ancestral Puebloan people — who had lived for centuries in this area –but it was not until a band of brothers who raised cattle had found the ruins that things began to change. The Wetherill brothers decided they wanted to become amateur archaeologists and began excavating and cataloging (and some say, plundering) the ruins. They sold many of the artifacts they uncovered to collectors and museums. People started to become a bit concerned, but it was not until a Swedish scientist tried to leave the country with a large load of artifacts from Mesa Verde that things began to change. The Swede was arrested but then released when it was discovered that there was no law at the time that stopped people from exporting artifacts; that collection is still housed in Sweden.

In the early 1900s, Congress introduced several bills to create Colorado Cliff Dwellings National Park; all failed. It officially became Mesa Verde National Park in 1906 when President Theodore Roosevelt signed it into law — just 21 days after he had signed the 1906 Antiquities Act that Congress had passed, a first step in protecting artifacts in national parks and monuments, making it a federal crime to collect or destroy any historic or prehistoric object or building on federally owned land.

The park is most known for the alluring and amazing cliff dwellings. Sometime during the late 1190s, after primarily living and farming on the mesa top for 600 years, many Ancestral Puebloans began living in pueblos they built beneath the overhanging cliffs — while still farming on the mesas above. The structures ranged in size from one-room storage units to villages of more than 150 rooms. While Cliff Palace (with its 150 rooms) gets all the attention and photos, the park has several other named cliff dwellings, including: Spruce Tree House, Balcony House, Step House, and Long House.

While the park is known for the Cliff Dwellings — and they are indeed thought-provoking — the park also protects many ancient structures and footings of structures that had been built above ground… prior to the construction of the Cliff Dwellings. It was on the mesa tops where these people farmed and hunted — and lived for centuries, starting around 550 AD.

The first people lived in pit houses dug into the ground. By around the year 1000, the structures had shifted to Pueblo-style brick buildings in compact villages of multiple rooms, often with at least one kiva — a round or keyhole-shaped courtyard used for religious ceremonies and political meetings (as see in the lower right photo in the collage).

At one point, scientists estimate that more than 30,000 people lived in and around Mesa Verde — three times the current population of the Cortez area!

The drive from the entrance off of U.S. 160 to the Chapin Mesa Museum is twisty and turny and offers some remarkable overlooks; it also includes a few places to stop and review archaeological sites — as well as short hiking opportunities. We drove the Mesa Top Loop and the Cliff Palace Loop, both of which offer more opportunities to experience pit houses and vistas of cliff dwellings. A third mesa drive with two other cliff dwellings — the Whetherill Mesa Road — is only open May through September.

We ended up hiking Soda Canyon Overlook Trail, Farming Terrace Trail, and Far View Sites Loop… all of which are fairly short. Most were dry, but as you can see in the photos, we had a little fun in the snow — especially Ran, who plopped down and did a snow angel for the first time in decades.

The park also offers ranger-led tours of several of the cliff dwellings seasonally, where you can actually go down into the dwellings — but you must purchase tickets in advance and be in good health because of all the climbing required.

Mesa Verde National Park offers such a diverse experience for visitors that this park should be on everyone’s list… the nature, the history, the ruins. The park is also one of handful of national parks that is a United National Educational, Scientific, and Cultural Organization (UNESCO) World Heritage Site.

We ended our fun in the Cortez area with an exploration of Sand Canyon in the Canyons of the Ancients National Monument, managed by the Bureau of Land Management. Technically, we started the day with a stop at the very beautiful visitor center and museum located in Delores, just north of Cortez, where we watched a film and learned about hiking opportunities within the park. The visitor center part is free, but the museum charges a small fee unless you have a park pass. The museum features the Ancestral Pueblo (or Anasazi) culture and other Native cultures in the Four Corners region and should not be missed.  Many of the artifacts come from the excavation work done when McPhee Reservoir was developed — as does the building itself.

The 176,000-acre park was designated by President Bill Clinton as a national monument in June 2000 to protect this vast collection of archaeological areas, which includes some 6,000 ancient sites — some visible along trails — including cliff dwellings, villages, and rock art. In terms of trails, hikers have two main areas to explore: Lowry Pueblo and Sand Canyon.

We chose Sand Canyon, on the southern end of the park, with views of Sleeping Ute Mountain… and as you can see from the pictures, this area has spectacular colored rock — more like Utah than Colorado. Note that parking is limited and you only know you have reached the trailhead by all the other cars parked along the side of the road. (If you pass Sutcliffe Vineyards, you just missed the trailhead.)

We decided to do a 4-mile loop hike, starting on the Sand Canyon Trail before heading west on a connecting trail to East Rock Creek Trail, and concluding with a another connector trail back to the Sand Canyon Trail. During the hike we stopped many times — in awe of this gorgeous planet — and thankful for our health to experience all that we have. Besides the beautiful colors and crazy formations, we also were able to see several more cliff dwelling ruins. Note that these trails are rough at times — often scrambling over and around rocks… but it is all worth it if you can do it.

One final comment. If you love ruins, you may want to start your hiking at the northern trailhead of the Sand Canyon Trail because the Sand Canyon Pueblo is located there — and it is one of the largest prehistoric settlements in the region with 420 rooms, 100 kivas, and 14 towers — all without exposed walls.

We did not visit it either time we were in the Four Corners regions, but there is also one more national monument you can visit — Hovenweep National Monument, administered by the National Park Service, and which includes six groupings of Ancestral Puebloan villages.

Next up, we continue our clockwise journey through Colorado — over to Montrose and our next national park.