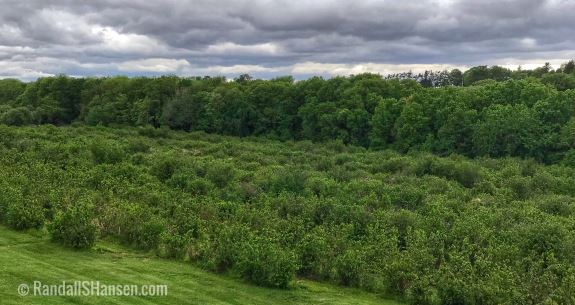 On our way through more of the Midwest, leaving Kansas on our way to Iowa, we had to make a several day stop in Nebraska City, home of Arbor Day Farm and the Arbor Day Foundation… which Ran has supported for decades, and which, as tree-lovers, we both had to visit. Call it a tree pilgrimage.

Arbor Day Farm consists of 260 acres in which the mission of the foundation comes to life — the mission of inspiring people to plant, nurture, and celebrate trees. Arbor Day Farm consists of Arbor Lodge State Historical Park, the Tree Adventure, the Apple House Market, and the Lied Lodge & Conference Center. The farm sits on the original estate of J. Sterling Morton, who campaigned for the idea of Arbor Day as a national holiday for planting trees. Soon after arriving in Nebraska City in 1855, Morton noticed the lack of trees (except by rivers and creeks) and began planting orchards and experimented with various crops, demonstrating to others the value of trees and conservation. In pushing for Arbor Day, he stated, “other holidays repose upon the past. Arbor Day proposes for the future.” Adding, “trees are the monuments I would have.”

On March 12, 1874, the Nebraska governor declared the first statewide Arbor Day, announcing it would be observed on April 10, 1874. In 1885, Arbor Day was named a legal holiday in Nebraska and April 22, Morton’s birthday, was selected as the date for its permanent observance. During that same period, many other states also declared Arbor Day, though the dates vary — to best suit the ideal time of year for planting trees. National Arbor Day in the United States is celebrated on the last Friday in April.

Morton was certainly an interesting figure and was well-known not only in Nebraska… He served four years as the Secretary of Agriculture (1893-1897) under President Grover Cleveland, supporting the president’s plan of establishing national forest reserves (which eventually became our national forests).

We started our visit at the Arbor Lodge, which has an interesting story of its own, starting with a very small (and modest) house that grew through several additions and modifications before turning into a 52-room mansion. Morton turned the house into a 30-room mansion; later his son, Joy (founder of Morton Salt Company), did a final renovation/addition to transform it into its current structure, which looks like a Midwest White House… but since it was only a summer home at the time, the family eventually (in 1923) donated the house (and all its contents) to the state, thus the house includes most of the original furnishings — including a Tiffany stained glass skylight in the sun room, a desk given to Morton by Teddy Roosevelt, and all the original artwork and china. The basement contains a one-lane bowling alley.

The house is surrounded by more than 200 species of trees and shrubs, including a rose garden, lilac grove, koi pond, apple orchard, and acres of oaks, maples, chestnuts, and pine trees.

Next to the lodge is the Carriage House and Tack Room, where you can see a variety of Morton’s fleet of buggies, surreys, and carriages.

Next up was a visit to the Tree Adventure, a nature-themed park that has something for everyone (and is great for kids). We, of course, started with watching the film and buying a magnet.

The Tree Adventure has several trails. We walked the .67-mile beautifully mulched South Table Creek Trail, which goes deep into the forest, passing over the creek on cool, timber bridges. Along all the trails, there are interactive exhibits and information, as well as scenic vistas. We then connected back up with the main (paved) trail, which leads to the 50-foot treehouse.

There are also two “nature classrooms” for children to learn more, as well as other seasonal activities (such as picking apples in the orchard).

The Tree Adventure ends in the Lied Greenhouse, where visitors can receive a “free” (paid for by your admission ticket) tree seedling to take home and plant. Since we live in a travel trailer, we declined taking any baby trees, leaving those for others.

Before leaving Arbor Day Farm, we stopped in at the Apple House Market, which has a selection of coffees, jams and jellies, gourmet foods, and wines. They also carry seasonal fresh fruit… we left with a bottle of Arbor Day Farm wine and a bag of coffee beans.

Arbor Day Farm also has a gorgeous lodge — the Lied Lodge & Conference Center — which offers 140 rooms, as well as restaurant and spa. We would remiss in not thanking Arbor Day Farm for providing us full admittance at no charge.

Love trees as much as we do? Join Arbor Day Foundation’s ambitious tree-planting initiative, which has a goal to plant 100 million trees by 2022. Learn more here: Time for Trees.

After our little taste of wine at Arbor Day Farms, we headed just a few miles northwest to Kimmel Orchard & Vineyard. Since 1925, apples, cherries, and dozens of other fruits and vegetables have been produced in the rolling hills of southeast Nebraska’s Missouri River Valley. Grapes grown include Frontenac, Chambourcin, DeChaunac, Edelweiss, Lacrosse, and Vignoles.

While wine was the main attraction for us, later in the summer and fall, they offer U-Pick opportunities (including strawberries, cherries, peaches, apples, and pumpkins), hayrides, and more. The Orchard is dedicated to agricultural education and research, historic preservation, and wholesome family experiences.

We quite enjoyed our tastings ($5 per tasting, with a small, souvenir wine glass included)… especially their Chambourcin, a red, semi-dry, French-American hybrid varietal with fruity characteristics — and bought three bottles for our trailer wine collection.

The center has several replica boats, including a keelboat and the White Pirogue — built for the movie, Lewis and Clark: Great Journey West. It also has interactive exhibits and lots of great information.

We have now covered most of the major parts of the 2-year Lewis and Clark’s Corps of Discovery Expedition… from its start in St. Louis in 1804 (to its return in 1806). While they explored what was then called the Louisiana Territory and Oregon Country, we have now visited key sites along the way in Missouri, Kansas, Iowa, Nebraska, North and South Dakota, Montana, Oregon, and Washington.

After visiting the center, we wandered down to the Missouri River Overlook Trail, one of several short trails on the property. From the overlook, we could see the river and the massive flooding beyond into Iowa.

We ended our short, but wonderful visit to Nebraska City with an “illegal” 12.6-mile bike ride on the Steamboat Trace Trail, a 21-mile crushed stone trail that was officially closed because of washouts and flooding. We witnessed more flooding near the trail, but the trail itself was in good condition.

Our biking adventure started at the Arbor Station Trailhead at County Road L, which is located about 6 miles south of Nebraska City. At this point, the trail is close to the Missouri River; it was amazing to see the water so close to the trail, but also sad to witness more farmland flooded. Much of the trail is shaded and we biked across bridges and near bluffs, and into some farm and ranch land.

The trail follows the route of the old Midland Pacific Railroad, which was later acquired by Burlington Northern — and even later abandoned. The rail corridor was railbanked by Rails-to-Trails Conservancy and deeded to the Nemaha Natural Resources District, the trail’s current manager, in 1995.

Nebraska City was a great stop for us — and it would have been even more amazing during fruit season, but we will far along on our journey toward the northeast by then!

Next up is a few weeks in Iowa, as we continue our west-to-east travels.