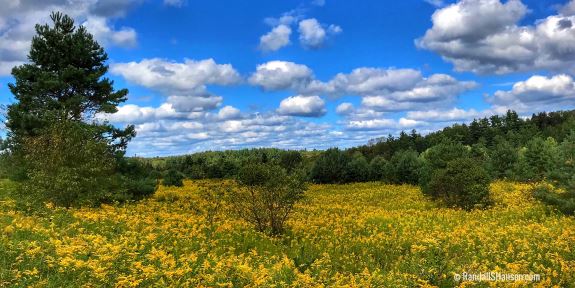 New York state has been a big and wonderful surprise for us. Even though Ran attended Syracuse University as an undergrad, he never really explored the area much beyond the university. The Finger Lakes were fantastic, as highlighted in our last blog post, but the Central New York region offers visitors lots to explore and appreciate… starting with the unexpectedly wonderful RV park that we called home while in the area: The Villages At Turning Stone RV Park. We were a bit concerned because the RV park is part of the Turning Stone Resort Casino operation, but we were pleasantly surprised by the wide spaces, great walking paths, big bathhouses, and fun nature trail. We had a great back-in spot right next to one of the ponds and we had our own set of friendly ducks and an occasional blue heron.

The Central New York region is more a marketing gimmick than formed by any specific geography… the area was originally called the Central Leatherstocking Region in tribute to the collection of stories (Leatherstocking Tales) of American author James Fenimore Cooper. It includes the counties of Onondaga, Madison, Oneida, Herkimer, Montgomery, Schoharie, Otsego, Chenango, and Broome… and an area of roughly 8,639 square miles. Major universities in this region include Cornell, Colgate, SUNY (State University of New York)… and…

Syracuse University, the first adventure during this stop, located on top of a hill overlooking the city. Founded in 1870, SU is a private university with about 15,000 undergraduate students and a total of 22,000 students (from all 50 states and more than 125 other countries) … “a student-focused global research university renowned for academic rigor, richly diverse learning experiences, and a spirit of discovery.” Today, the university offers 200 majors, 100 minors, and 200 advanced degree programs across 13 academic units. Ran is part of a quarter-million alumni living around the world; he graduated with dual bachelor degrees from SU — a marketing degree from the Whitman School of Management and a magazine journalism degree from the Newhouse School of Public Communications.

The university has also embraced veterans, which we love. It created the Institute for Veterans and Military Families, which is committed to making a difference for those who have served — focusing on the social, economic, educational, and policy issues impacting veterans and their families post-service.

We had a great morning wondering around the campus, marveling at some of the major updates that have occurred since Ran’s time there. We also drove up to the South Campus, where Ran lived while a student… and that area has exploded as well. Overall, a fun visit at a great university. By the way, much of Ran’s unpublished novel, Stanley, is based at Syracuse — and it was fun for Jen to see some of the places described in the manuscript.

While in Syracuse, we also hit up a local natural food co-op and stopped in at another Costco, Store #1176.

After all the bustling of the university and our shopping excursions, it was time to get back to nature… with a hike along the Gorge Trail in nearby Cazenovia. The Gorge Trail is a 2.2-mile long trail that follows the rail corridor of the old Cazenovia & Canastota Railroad, which began in 1870; the line was later used by Lehigh Valley Railroad, carrying freight and passengers until the line was abandoned in 1967.

We started at a small parking area
across the street from the old railroad buildings (and Cazenovia Lumber & Oil) on William Street. While it has been repurposed, head past the old depot (constructed in 1894), heading north on William Street and you’ll hit the trailhead. There’s also a parking area for the trail on Clark Street. Much of the trail is wooded (with some parts overgrown) and follows along Chittenango Creek.

The Gorge Trail is also part of the 40-mile Link Trail, which was originally created to connect the Finger Lakes Trail with the Old Erie Canal Trail. Cazenovia is almost smack in the middle of the Link Trail; the southern end is in Deruyter’s Mariposa State Park, where it connects with the Finger Lakes Trail. The trail travels north, just east of Syracuse, to the village of Canastota, where it connects to the Old Erie Canal State Historic Park Trail. Furthermore, at the Tioughnioga Wildlife Management Area, located in Erieville (southeast of Cazenovia), the Link Trail connects to the northern terminus of the 41-mile Onondaga Trail.

To add further interest — or confusion — all of the Onondaga Trail and all of the Link Trail northward (including the Gorge Trail) are part of the North Country National Scenic Trail, a 4,600-mile trail that starts near Crown Point in eastern New York (though soon it will start in Vermont) and continues westward to Lake Sakakawea State Park in central North Dakota. We have lost count on how many times we have been hiking a trail and discovered it is part of the North Country National Scenic Trail… so much fun!

The park also protects and preserves one of the largest stands of old-growth forests in Central New York — including a collection of tuliptrees, sugar maples, beech, basswood, hemlocks, and white cedars. The park also has a fairly large campground with 145 campsites (96 electric) and seven cabins. Finally, for golfers, the park also has an 18-hole golf course designed by Robert Trent Jones.

We rented a tandem kayak (rentals are first-come, first-served, and all the single kayaks had already been rented), and hit the lake for a fun paddle around the perimeter and shoreline. It was one of the cheapest kayaks rentals we have done on this adventure! (No outside boats of any kind are allowed in the park because of the sensitive nature of the lakes.)

After kayaking, we changed outfits and put on boots to hike the 3-mile loop around both lakes. In total, there are about 20 miles of trails for hiking and cross-country skiing in the park.

The now almost 2,000-acre Green Lakes became a state park in 1928 when the state purchased 500 acres surrounding the two lakes. Some of the structures in the park were built in the early 1930s when then-Governor Franklin Roosevelt created the Temporary Emergency Relief Administration (TERA) to help New York’s unemployed. When Roosevelt became the president of the U.S. in 1933, he created the Civilian Conservation Corps (CCC), partly based on his success with TERA. And, of course, two CCC camps were set up in Green Lakes to clear brush, make trails, plant trees, lay phone and power lines, and build miles of park roads. Even the 18-hole golf course was constructed (along with its clubhouse) by the CCC.

Finally, the park also contains the Environmental Education Center, which puts on various nature programs throughout the year.

Next up was a visit to the 193-acre Chittenango Falls State Park located east of Cazenovia Lake (and about 35 miles southeast of Syracuse). You can actually see the waterfall from the road as you approach the park — but to fully experience this stunning 167-foot waterfall cascading over 400 million-year-old bedrock you have to do a little hiking.

We started with a quick view from the top, but knew we would have to take the crazy, winding trail down into the gorge to view the falls from the footbridge over Chittenango Creek, returning to the top along the small (and steeper) trail on the opposite side of the gorge… a cool, but strenuous hike down and up.

The falls was the site of several mills and factories in the mid-1800s, but amazingly, the land was purchased by the Chittenango Falls Park Association in the 1880s to ensure it was accessible to the public. It became a state park in 1922.

The park also includes several other trails, as well as picnic tables with pavilions, and a playground. Fishing is permitted.

We parked at Erwin Park in Boonville. The trail starts just southwest of the park and actually runs along its western boarder. The path of the trail varies from dirt to crushed stone and even gravel. It is a beautiful and peaceful trail for sure.

Amazingly, as we approached the start of the trail, we saw yet another sign for the North Country National Scenic Trail… and again we marveled at how often we have come across part of this trail in our journeys.

We pushed ourselves to complete the full 20-mile (RT) journey — and we just made it! While the trail is very scenic, it was muddy and rutted in parts which made the biking bit more difficult.

Kayaking is supposedly allowed in the feeder canal, but we could not see how as there were too many downed trees in the waterway… we did, however, see a small group of ducks and geese enjoying the waterway.

After enjoying the trail and before leaving the area, you may also want to visit the Boonville Black River Canal Museum, which preserves, houses, and displays artifacts from the canal era.

Just to the south, in Rome, one can also connect with the 360-mile Erie Canalway Trail, which follows the historic waterway that connected Lake Erie with the Hudson River, west-to-east, from Buffalo to Albany. We have loved learning more about “the eighth wonder of the world.” The Erie Canal certainly is a fascinating piece of American transportation history — and one of the northeast’s best known and enduring icons.

We headed back to the RV park and enjoyed a wonderful dinner and a glass of wine for putting in that many miles on the bikes.

We really loved the time we spent in Central New York; it is a beautiful place — and so full of canal history. (FYI: There is also an Erie Canal Museum in downtown Syracuse — located right along where the canal used to run; the canal was filled in during 1925 and the land converted to Erie Boulevard, a major thoroughfare that runs east to west through the city.)

Next up? We head westward for a pilgrimage to Niagara Falls.