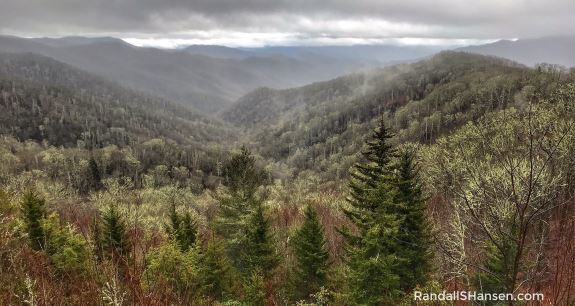 Our trip to the Great Smoky Mountains ended up being quite different than what we planned when our travel trailer had a tire blowout that led to not only an axle replacement but a reinforcement of the entire trailer’s frame after a fracture was discovered.

Still, we loved our short time in the Great Smoky Mountains National Park — the 45th national park we have seen on this great adventure!

Great Smoky Mountains National Park is the most visited national park by far; in fact, it receives more visitors than the combination of the next two most popular parks (Grand Canyon and Rocky Mountain). In the last two years of figures, Great Smoky National Parks received more than 11 million visitors annually. The park, which includes some 522,419 acres of forest, ridgelines, and river/streams and waterfalls, was established by Congress in 1934 — and straddles the border between North Carolina and Tennessee. (We were amazed to discover the park has so many waterfalls — as well as many smaller cascades and falls along nearly every river and stream; we joked the park should be renamed Great Waterfalls National Park.)

We came into the national park from the east side, stopping in the North Carolina section first — at the Oconaluftee Visitor Center, located just outside of Cherokee. The fairly new (built 2011) visitor center replaces an older one built by the Civilian Conservations Corps (CCC). The current visitor center is energy-efficient — with eco-friendly architecture and design, including flooring made from salvaged American chestnut, rubber, and recycled carpets — and even geothermal heating and cooling system.

We spent some time exploring the Mountain Farm Museum, located adjacent to the visitor center. The outdoor museum consists of a series of structures (mostly dating back to the 1900s) that were relocated from their original locations throughout the Smokies. (About 1,200 families had to sell their land and homes for the creation of the national park.)

After touring the visitor center, we asked a ranger about hikes — and of course, bought a magnet.

Our first hike was the Kephart Prong Trail, located about 7 miles west of the visitor center. The highlight of this hike is that it passes near the remnants of one of the 20+ CCC camps that were at one time located within the national park. As you can see in the bottom right two photos in the collage, an old stone signpost and an old chimney are mostly all that remain of Company 411, which was located here from 1933 to 1942. (The camp once included a barracks building, an officers building, a mess hall, a recreation hall, and several other specialized structures.) The trail then continues up
a steady ascent up the southern slopes of Mt. Kephart until reaching the Kephart Shelter at the junction with the Sweat Heifer Creek Trail. Doing this full hike would be about 4 miles (RT), but with rain making the hiking slick and not so fun, we turned around at about the 1-mile mark. The trail, structure, and mountain peak are all named for Horace Kephart, an early proponent of national park status for the Smokies — and yet another reminder of how one individual can have a large impact.

We continued our driving westward on the park road (Newfound Gap Road), stopping at the Oconalulftee Valley Overlook and Newfound Gap.

While the Smokies are reported to almost always have some sort of cloud cover, we enjoyed the vistas from the overlooks along the way, with the rain and clouds sometimes giving way a bit for some wonderful views.

But by the time we arrived at Newfound Gap, the rain was back in full force — along with much cooler temperatures. Newfound Gap is the lowest drivable pass through the Great Smoky Mountains National Park. (In southern Appalachian vernacular, a gap is a low point in a mountain ridge.) A massive stone structure — the Rockefeller Memorial — shown in the collage — honors a $5 million donation from the Rockefeller Foundation that helped complete land acquisitions to bring about the creation of the Great Smoky Mountains National Park.

The other highlight of this stop is that the Appalachian Trail (AT) is located here. The AT runs through the park, straddling the state line between North Carolina and Tennessee. We have lost count now, but it is the third or fourth section of the AT that we have hiked. The AT is a National Scenic Trail completed in 1937 that travels from Georgia to Maine — a “2,180+ mile long public footpath that traverses the scenic, wooded, pastoral, wild, and culturally resonant lands of the Appalachian Mountains.”

FYI: Just south of Newfound Gap, the seven-mile Clingmans Dome Road climbs to within 0.5 mile of Clingmans Dome, the highest peak in the Smokies. Unfortunately, this road is closed from December through March.

We ended our first day in the Smokies at the Sugarlands Visitor Center, located at the west entrance of the park — just a few miles south of Gatlinburg. We watched the park movie here because we were told it was a better experience as it is shown on a big screen.

We spent the night in a cabin — for the first time ever without our wonderful travel trailer — at the Pigeon Forge/Gatlinburg KOA, which is a beautiful campground with a lot of upgrades and a very friendly and helpful staff. We loved the strong Wifi.

We also took a little time to explore Pigeon Forge, Sevierville, and Gatlinburg — and just wow… be prepared to be overwhelmed with the massive amount of tourism/touristy stuff that clogs the landscape — from go-karts to indoor skydiving to ziplines to escape rooms to Dollywood… and SO much more. The traffic was kind of bad when we were visiting, and we could not imagine how congested it is during the high points of tourism.

We happily re-entered the national park and headed out to an early morning hike to Laurel Falls.

Laurel Falls, an 80-foot high waterfall, is named for Mountain Laurel, an evergreen shrub that blooms along the trail and near the falls in May. The waterfall consists of an upper and a lower section, divided by a walkway that crosses the stream at the base of the upper falls. (Both bottom pictures in the collage show the walkway.)

The hike is one of the most popular in the park, and while there is parking on both sides of the road, be prepared. The trail is mostly paved — which is odd — but very rough in stretches; it is not accessible or stroller-friendly. The in and back hike will be about 2.6 miles, and the hike is considered moderate in difficulty. (It is also mostly uphill on the way to the falls.) As you can see in the collage, the trail also offers a few very nice vistas along the way to the falls. One final note: While a popular hiking spot, this parking area does not offer any bathroom facilities, so plan accordingly.

Speaking of that issue, after the hike we headed back to the Sugarlands Visitor Center… to use the bathrooms. While there, we decided to hike the Fighting Creek Nature Trail and onward to Cataract Falls, one of the hidden gems of the park… which ends up being about 1-mile RT.

The waterfall consists of two low-flow streams that drop over a 25-foot ledge into a small pool below — as seen in the lower left picture of the collage.

Other waterfalls to consider visiting in the park include Grotto Falls, Rainbow Falls, Fern Branch Falls, and Ramsey Cascades.

From there, we continued our travels eastward, stopping at Mingus Mill, located not far from the Oconaluftee Visitors Center. This historic grist mill (completed in 1886) uses a water-powered turbine instead of a water wheel to power all of the machinery in the building. It was the largest mill in the Smoky Mountains, and served more than 200 families, who brought their wheat and corn to be ground. The National Park Service fully restored Mingus Mill in 1966 and still does limited demonstrations during spring and summer.

The Smoky Mountains are amazing for tree lovers — offering five forest types, including: Spruce-Fir Forest (consisting of Fraser Fir and Red Spruce), Northern Hardwood Forest (predominantly Beech and Yellow Birch), Cove Hardwood Forest (offering the most diverse old-growth trees), Hemlock Forest, and Pine-and-Oak Forest. The park has more tree species than all of Northern Europe — as well as also having 1,500 flowering plants, 200 species of birds, 60 species of mammals, and dozens of native fish.

The Cherokee called the Smokies shaconage, meaning “blue, light smoke.” When President Franklin Roosevelt dedicated the park in September 1940, he spoke from the Rockefeller Memorial at Newfound Gap, stating “It is good and right that we should conserve these mountain heights of the old frontier for the benefit of the American people.”

The mountains are indeed beautiful — and there are many challenging hikes to reach some of those heights, none of which we chose to do given the rain and poor weather conditions. These include Chimney Tops (which is only a 4-mile RT hike, but with an elevation gain 1,400 feet, a very steep climb); Alum Cave to Mount Le Conte (about 2.5 miles one way to Alum Cave Bluffs, but continues to just below the summit of Mt. Le Conte for a total of 5.0 miles one way, with a 1,200-foot elevation change); Rainbow Falls (about 2.7 miles one way to Rainbow Falls, and the trail continues past the falls for a total of 6.7 miles up to the summit of Mt. Le Conte, with an elevation change of 1,700 feet); Ramsey Cascades (about an 8-mile RT). There’s also parts of the Appalachian Trail, as well as Clingmans Dome and Smokemount Loop Trail.

After leaving the Smokies, we returned to Georgia for another week or so, awaiting the complete restoration of our travel trailer.