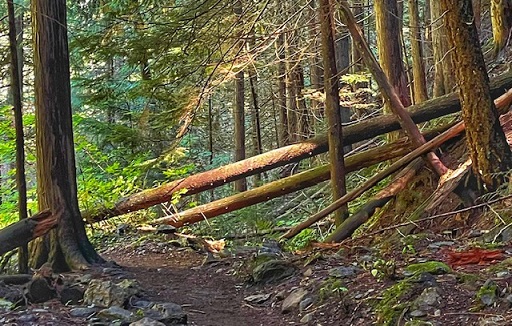 Well, I guess you could say we’ve been pretty busy the last year and a half — finishing the house construction, managing our forestland, and working in various jobs and volunteering.

No excuse, but we really had no time for the blog. We feel a little badly, as we have had a bunch of adventures while building the house — including trips to Mount Spokane, Walla Walla, Boise, and Crater Lake.

But with this last wonderful trip, we had to restart the blog. Ran had been wanting to visit Wallace (as well as nearby Kellogg) for more than a decade — ever since he first drove by the town on I-90… and even more so after reading Timothy Egan’s book, The Big Burn, which describes the horrific wildfires back in 1910, nearly wiping out several towns in Idaho — during a summer when the entire western part of the U.S. was in a severe drought.

It’s also fitting to restart the blog — now featuring sporadic posts throughout the year — because it was our first adventure together with our new bikes. And if you like bicycle riding, then Wallace should be a MAJOR hub for you, as multiple rail-trails run in this area, including: the Trail of the Coeur d’Alenes, Route of the Hiawatha, Route of the Olympian, NorPac Trail, Milwaukee Road Rail-Trail, and North Idaho Centennial Trail.

But Wallace offers much more — a beautiful and quaint downtown, a deep and rich mining history, quirky stores and restaurants, and a powerful connection to the Big Burn. We stayed in the Brooks Hotel — right smack in the middle of town — and absolutely loved it, and would recommend it to anyone visiting the area.

We started our adventures with a walk through town, including walking down one of the main residential streets near sunset. Absolutely charming.

We decided to hit the Pulaski Tunnel Trail early Saturday morning. The weather was perfect — and so was the trail.

Besides the natural beauty of this trail, which follows the path of the West Fork of Placer Creek, this trail is steeped in history — and all the interpretative signs along the way reinforce the story of the Big Burn/Big Blowout and the hero, Ranger “Big Ed” Pulaski, who led a bewildered and lost fire crew of 43 men into the Nicholson mine — now known as the Pulaski Tunnel — and saved all but six of them from the massive fire.

By the time 1910 was over, more than 3 million acres of Idaho, Montana, and Washington were burned to the ground; many towns were partially or completely burned; and at least 85 people lost their lives. You can read a beautiful account of it here: Two Terrible Days: The 1910 Fire.

The 4-mile (roundtrip) trail begins at a well-marked trailhead about one mile south of downtown Wallace, on Forest Service Road 456. The trail is about 4 miles, roundtrip, with some elevation gain, though a thick (too thick) and lush forest that hides the devastation the fire left behind.

The hike is a beautiful and moving experience. These 1910 fires completely changed the way the Forest Service viewed and fought fires. And for the next century, their strategy was wildfire suppression, especially in areas where wilderness met communities… which then led to the megafires we face today — because of the massive amount of “fuels” (trees) left untouched in forests all across the country.

We took at break back at the hotel for lunch and to put our feet up for a bit before heading back out — this time with our bikes — and took a 10-mile ride on the Trail of the Coeur d’Alenes, a 73-mile paved trail spanning the Idaho panhandle between Mullan and Plummer. It was created through a unique partnership among the Coeur d’Alene Tribe, Union Pacific Railroad, the U. S. Government, and the State of Idaho. The trail is special not only because of the spectacular scenery and towns along its route, but the trail is also part of an innovative solution to the environmental problems caused by the early silver mining activities that put heavy metal fines onto the original rail bed.

The next day, we were a bit sore and tired, but definitely up for one more hike — and just wow. The Upper Glidden Lake (#135) Trail is a near-perfect trail.

We decided on the 2.5-mile trail to this alpine lake located in the Coeur D’Alene National Forest because of its location (just northeast of Wallace) and it’s manageable hiking distance. While this trail is absolutely beautiful and the lake quite pretty, the road getting to the trailhead is a bit sketchy in places and it’s preferable to have a vehicle with good road clearance. One added feature of the drive from Wallace to the trailhead is that you pass through several old mining towns — including the remains from several closed mines.

The 16.4-acre lake is peaceful and clear. Several varieties of fish (including rainbow trout, bull trout, and arctic grayling) are in the lake, but most people come to enjoy the hike, a bite to eat, maybe even a swim.

Overall, Wallace, ID, and the surrounding area, is a special place to visit. You’ll find mining, railroad, and firefighting memorials and museums; crazy mountains with lakes and vistas; lots of hiking trails and some great and historic rail-trails (with bicycle rentals nearby); ziplines; and fun restaurants and bars. Learn more here.

Finally, we have to give a shout-out to CDA Bike Co., located in Kellogg, ID, the next town up from Wallace. The bike shop is located in the old freight depot along the Trail of the Coeur d’Alenes and they were quick to make a few adjustments to tune Jenny’s new bike. Friendly and competent people.

When we return to the area next year, we plan to stay longer and explore more of this special place — including more of the trails! We might even go a bit further south to the St. Maries area, though not staying in Wallace may be a hard choice!